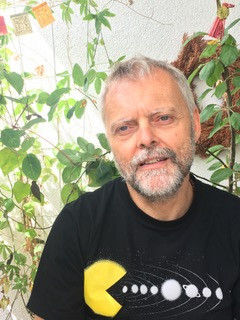 Italian by origin, nomadic by vocation. Graduated in Economics & Business and in Law from the University of Pisa. Former Professor of Law and Economics, Research Assistant, Lawyer and Business Consultant.

Always interested in spiritual research, his training and transformation process passes through Gestalt, Coaching, NLP, Family Constellations, Systemic-Relational Therapy and above all the SAT Program.

Disciple of Claudio Naranjo and his collaborator in the SAT Program of various countries of the world. Director of the Uruguay SAT-Program.

He currently lives in Barcelona.

"I am from Tuscany, I like to state it, without saying more, without going into more detail, indulging in useless localisms and parochialisms although historically very rooted in my native land, but I like to say it. It seems an anachronism, given that by now, after so many travels and pilgrimages I consider myself a citizen of the world, but being able to appeal to such illustrious progenitors as Leonardo, Dante, Michelangelo, Galilei in such an empty and dark historical moment, is a privilege that I don't give up with a light heart.

My academic training is the most distant and antithetical thing one can imagine compared to the spiritual perspective of life, yet that hunger for "meaning" has always tormented me, “not a famine for bread or a thirst for water, but rather for hearing the words of the Lord”

In fact, from an early age in my family I was exposed to the influence, not to say oppression, of a traditionalist and backward Catholic culture, especially conveyed by my maternal grandmother, with her indisputable and unshakable faith. Despite a life of real hardship, at least for a large part of it, in which she experienced hunger, war, slavery to work in the fields and to serve in a house of "gentlemen" from an early age, the death of ten of her eleven brothers, the madness of her mother and other minor adversities, in her long life, which led her to touch the century, I have never seen her doubt even for a moment, her faith was granite. There is something true, there must be something that "lasts" I must have thought as a child.

Growing up, this faith made up of dogmas, rules, impositions, judgments crushed me and I increasingly rebelled and distanced myself, but that intuition and that hope have always remained alive in me. There must be something true, imperishable somewhere, something worth living this life for. This thought must have continued to resonate within me, so my research continued under the radar, not dormant, indeed fueled by the painful experiences of my childhood, from chronic illness to the loss of my father in tragic circumstances, perhaps in an unconscious but constant way. I needed to (re) find the spiritual path, I needed it more than the air I breathed.

And suddenly the connection arrives, almost unwittingly, for one of those cases in life, which when you look at them in perspective you realize that they were not so fortuitous, if anything they seem more pieces of a gigantic puzzle that little by little, magically, go to placed alone and make up the mosaic of your life.

According to the Zen philosophy “When the student is ready the teacher will appear”.

So, suddenly, Claudio Naranjo bursts into my life, and my life is no longer the same, or perhaps better, I set out to meet my Life, the real one, gradually abandoning that simulacrum I had built and to which I was the first to believe and worship.

But let's come to the meeting with the Maha Leela, because if I start talking about Claudio, the matter risks going too long...

My encounter with this ancient Hindu game does not have much to do with Claudio, if anything more to do with another Master, Sri Prem Baba, whom I visited for the first time in his ashram in Nazaré Paulista, accompanying my partner of the time who, like many others in Claudio's "sangha" in Brazil, shared the devotional love between these two masters.

There I met Prem Lila, who bore this spiritual name because of her mastery in the use and deep understanding of this game and so, a little by chance, a little out of curiosity, I asked her if she could accompany me and introduce me to the Maha Leela. I was fascinated: the subtle balance of arcane forces between the numerical response of the dice, the corresponding squares on the board and Prem Lila's skilful and intuitive interpretation highlighted attachments, character dynamics, hidden parts of myself that had cost me years to unmask, yet they were there, visible with extreme ease and clarity. Really impressive, I've never seen or experienced anything like it. 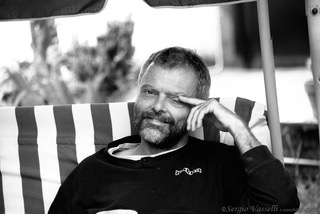 From that moment, far from thinking that one day I would use this "game" as a work tool, I began to use the 72 boxes that make up the board as a conceptual grid, a sort of organizer, a filing cabinet where to insert and classify neatly for concepts all the knowledge and experiences that I was maturing in my personal "hero's journey".

I asked Claudio one day if he knew this game and despite my enthusiasm in telling him about my experience and how synchronous and profound it seemed to me, he just looked at me and smiled, without saying a word or giving more importance to the matter.

I thought that actually he did not care that much and how foolish I had been in making myself see so fervent for something so light and futile, a simple game... What a low-grade spirituality! What a fool of myself in front of the Master!

I then had to discover by myself, over time, that Claudio himself had actually written the preface to the first edition of Harish Johari's book "Leela - The game of Self-Knowledge" of the year 1975, and that Harish Johari himself had been one of the professors of the first SAT in California in the 70's, ergo his opinion on Maha Leela as well as on this musician, composer, painter, sculptor, scholar and teacher of tantra, gemologist, cook, a sort of modern Leonardo, did not have to be so low.

Thus the drive towards in-depth study, reflection, and the reworking of a more personal version, albeit faithful to the ancient tradition, of this instrument became even more pressing and ardent.

Obviously the idea is not to go around disguised as a Hindu guru to pontificate on the ancient teachings of the Vedic Upanishads, I don't know how to do it, it's not really my style nor in my "spiritual lineage", but yes I believe that this instrument, so flexible, so inclusive, so in line with the "philosophia perennis" is able to convey, like few others, a synthesis between the various spiritual, therapeutic and educational paths that aim at the common goal of the final stage of the development of human potential, and in this sense I propose to use it.

Claudio expresses himself in the aforementioned preface:

An interesting peculiarity of Leela is that it not only displays a geography of the soul or a standard path, but ways in which the individual may fall, failing to sustain a state achieved, or rise to a state much higher than the present one, skipping stages. These falls and risings, represented by snakes and arrows, ornament the basic structure in a way that can originate a virtual infinity of individual paths. Not only does this feature of Leela impress me as lifelike, but, I suggest, it offers some observation of the game, that as the player follows the throw of the die he will, no less than in the case of consulting the I Ching or Tarot, note the play of synchronicity. Due to this “strange” phenomenon, which, according to Pauli and Jung as well as to religious and magical conceptions, is a basic aspect of reality— the player may discover that the choices of chance are not meaninglessly random, as “commonsense” would have it, but take him (sometimes insistingly) through stations, snakes, and arrows that are particularly relevant to him at the time. For this reason, I anticipate that this indian game may come into use not only for its entertainment value and as a pleasant means of absorption of and familiarization with Indian metaphysics, but as a mirror for self-knowledge.

Taking up this invitation, I propose to use the Maha Leela just as a mirror to know and recognize ourselves and our behaviour patterns.

A fascinating journey that of the “Leela-Travelers” (that’s how I consider most appropriate to call them), a complete journey in which it is necessary to make use of all our human potential, a journey of discovery, understanding and integration. The journey of the hero, but also the journey of the child, as Claudio masterfully describes it in his book “El niño divino y el héroe” (The divine child and the hero):

The Hero, who suffers from feeling incomplete and cries out for the adventure that will give him fulfillment, moves with a strength and a determination that arises from the courage of the heart: for the man who has created reality and has conceived a cruel monster, killing the monster or being eaten by it is the action of overcoming duality and reconciling the (apparent) opposites.

Claudio argues that “the legend of the hero cannot be anything other than mythical: the true target of anger in man cannot be other than the prison that he has built for himself in his imagination, and cannot be found in the real world. And it is in the ruins of that prison that he can find the philosopher's stone that he desired: his own unused and diverted energies. The dragon is unreal, but by killing it, the hero eliminates his own fantasy. On the other hand, being the dragon the reflection of the unexpressed personality of the hero, it is for him more real than anything in the world (...) Once he decides to face everything he has rejected as "bad", "unpleasant" and "dangerous", he may discover that the beast was the beauty, that it could not be seen for lack of love”.

The Child illuminates what happens effortlessly, with confidence, serenity and wisdom. “The type of literature that focuses on the figure of the child” says Claudio “is maternal: just as the mother trusts the work that nature does through her during her gestation period, the maternal attitude of man consists of trusting in everything that develops from itself and by itself ”.

The purpose of this Game is precisely to help the Leela-Traveler to elevate his vision, illuminating his heart and his steps, beyond any circumstance, to integrate the opposites and achieve that fullness that Claudio describes at the end of his book: “Because man is the hunter who loves the mermaid who loves the hunter: he is most complete when he can let his inner opposites embrace and complement each other, instead of weakening each other in contradiction”.

The version of this ancient “game” that I present is the result of my research, reflection and reworking in its current state.

I sincerely thank Prem Mandir and Prem Lila for introducing me and initiating me into this cosmic game. I’m also grateful to my beloved friend Parama Libralesso for gifting me a work of art as a billboard. This billboard is actually fruit of his creative mastery and deep connection with Hindu culture. It contains so many symbols and play of colors, that just by abandoning oneself to its contemplation for a few minutes, it has the hypnotic power to lead the observer towards other shores."