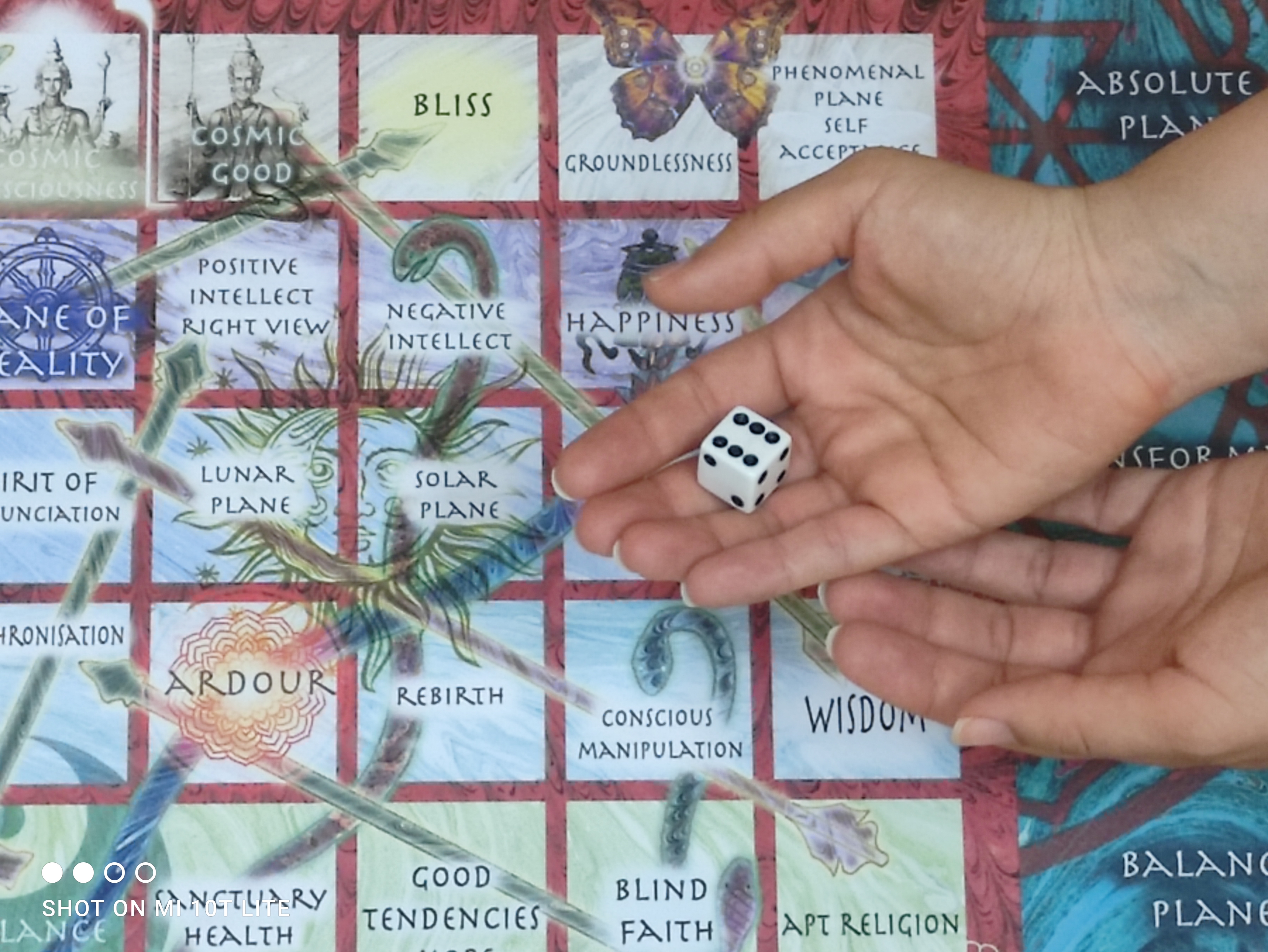 The game consists of a series of numbered squares (lokas), through which the participant moves by throwing a six-sided die and in which the arrows, starting from virtues or positive attitudes, raise him to higher levels, while the snakes, following the fall into a vice or negative attitude, bring the player back, causing him to fall back to lower levels.

The game board of the Maha Lilah symbolizes the path of human evolution, the stages of the Hero's Journey, we could say, using a terminology so dear to Claudio Naranjo.

Each one of the 8 rows (or planes, or stages) of the table represents a level of consciousness. Each plane contains 9 squares that reveal its characteristics. The first 7 rows are associated with the chakras, while the eighth represents a plane which, as its very name (Absolute Plan or Divine Plan) and the original meaning of the word Leela (God is playing) suggest, lies beyond our body and our ability to understand.

According to Carl Jung, there is a close relationship between the internal and external events that we experience, a relationship that cannot be explained by the principles of cause and effect, but which nevertheless makes sense for the observer. Synchronicity, defined as "a principle of acausal links", consists of a link between two events that occur simultaneously, connected to each other, but not in a causal way, that is, not in such a way that one materially affects the other. They would rather belong to the same context or meaningful content, like two clocks that have been synchronized on the same time. Faced with this phenomenon, any previous consideration on the relationship "this leads to this other" is swept away in an instant.

The dice is thrown from the hand to the board and upon stopping it shows us a number: randomness, coincidence or, in fact, nothing happens by chance? What does the concept in this square say about me? How do it question me?

As he moves across the board from square to square, the player will begin to understand more clearly and deeply the many facets that make up his identity. Through this channel-game we can "receive" precise information about ourselves, seeds of clarity offered by consciousness that have accompanied Hindu culture since time immemorial.

The board begins to "play" with our mind, thus setting its purpose in motion: to free our consciousness from knots and erroneous interpretations and to show us our relationship with the Absolute, which happens symbolically when we reach box number 68, Cosmic Consciousness.

In some squares the head of a snake is encountered and in others the handle of a sword (or arrow). With the arrows we ascend, with the snakes we descend so that, depending on whether we fall into one or the other, we will ascend thanks to the arrows towards higher stations and energies and we will fall through the serpent heads to those places from which we had risen and perhaps we imagined that we would never return to.

We will focus on the concepts contained in each square in which the traveler "falls" to investigate how certain attitudes, behaviours, compulsions and characteristics suggested by them affect his life and his relationships and how they can represent an obstacle or a resource with respect to the topic concerning the session according to the intention of the player himself, and more generally with respect to his growth path.

Through a methodology that integrates meditative practices, cognitive reflection and emotional Gestalt work, we will work to dissolve the knots linked to our "ignorance" and realize the essence of the divine game… living fully ourselves by developing our human potential.