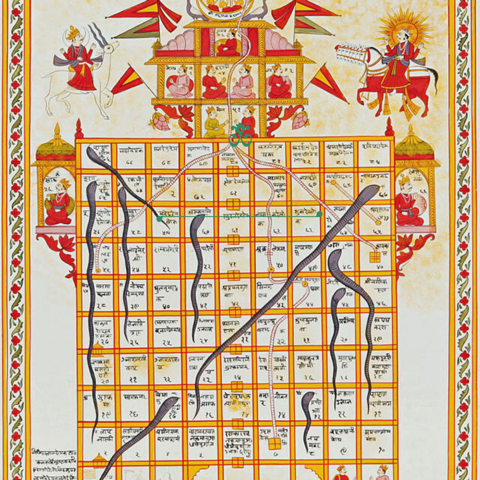 Maha Lilah (the Great Game) or Gyana Chaupad (the game of self-knowledge) is a millennial game of Hindu origin, elaborated by the Rishis (sages, saints, seers) to reinforce the religious teachings, mentioned and partly described in the ancient Vedic scriptures of the Sanatana Dharma, according to which this life is nothing but a great cosmic theatrical game in the mind of the God Vishnu, the one who supports the universe.

Neither the author nor the date of creation of the game are exactly known. The oldest known table dates back to 2500 BC. The golden age of this game coincides with the Mughal dynasty (1526 - 1857), as revealed by the tables carved in marble found in the palaces of Agra and Allahabad.

During the Victorian era (1892) the game was brought to the West by the British and can rightly be considered the progenitor of modern board games inspired by the same dynamic of ascension and fall, advancement and regression, governed by arcane forces that they manifest themselves through the throw of the dice, like the British "snake and ladders" or the “goose game".